The most simple approach to securing your Smartfurn cupboard to the wall is to use a Samoosa, this is a basic fixer plate and gets its name from their overall size and shape. Fixer plates are mental triangular plates that have 4 strategically placed holes see picture below.They are inexpensive and can be bought from most DIY shops. You will need a minimum of 2 Fixer Plates per cupboard for each top corner. If you are looking for an even stronger setup and don’t think that is sufficient, you can use 4 one on each corner of the cupboard (2 x top 2 x bottom).

Before starting I recommend that:

Directions for securing the cupboard 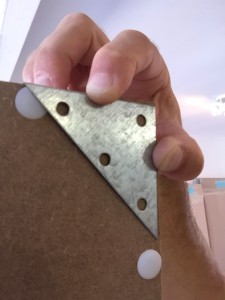 Place against the wall

After all plates have been secured and the single hole through the backing has been made you can place the cupboard in position against the wall.

Whilst you have the cupboard positioned against the wall mark the position of the hole you will need to drill in the wall. You can push a pen or pencil through hole in the backing board, and mark the wall behind, making sure that it is at the centre of the backing board hole.

Move the cupboard away from the wall and then drill the hole in the wall at the place you marked. Ensure that you drill to a depth that can accommodate the wall plug, however do not insert the wall plug at this point !

Should you be attaching the cupboard to a drywall please make sure that you use the appropriate drywall plugs.

Once you have moved the cupboard back to its original position, ensure that the holes in the wall and cupboard are now lined up.

Insert the wall plug through the back of the cupboard and into the wall, you may need to tap with a hammer to secure

Hammer in the plug screw to secure

Do you have skirting…looking for a flush fit ?

If you have a skiring and want to have your cupboards fit flush against the wall there are two options providing that your skirting is less than 100mm high.

2/ Cut out a small section from the back of each side of the cupboard
This is messy and best done with a jigsaw but .
Remove the doors and lie the cupboard face down.
Mark out in pencil the area that needs removing and cut.
Standard skirting is 70mm high and 18-20mm thick A 75 x 20mm cut out would be recommended for this sized skirting.

Once the cupboard is flush against the wall drill through the 4 corner holes in the backing using a Masonry bit size 6 should be sufficient.
You need to get size 6 Knock- in Hilti screws. They are screws that come with they own raw plug these are secured using a hammer and are knocked in easily.

Depending on how hard your walls are and how accurately they 4 holes have been drilled you may find that the doors have moved out of alignment as the carcass has twisted slightly. The doors can be re-aligned by adjusting the hinge settings.

Once the rail is secured to the cupboard drill two or three holes through the plinth / rail and the backing.
Place the cupboard flush against the wall and follow the instructions as described in option 1